Toyota has introduced its rebadged version of the hatchback, the new Glanza, just a few weeks after the new Maruti Suzuki Baleno. While the previous Glanza could only be distinguished from the old Baleno by its front grille and logo, Toyota has made significant changes this time around to distinguish it from its Maruti counterpart. Glanza costs between Rs 4,000 and Rs 20,000 more, depending on the variant. Both are powered by a 90hp, 1.2-litre petrol engine with manual or AMT transmissions. Glanza comes with a more comprehensive warranty package.  Lets have a Maruti Suzuki Baleno vs Toyota Glanza.

Unlike the previous Glanza, which was only available in higher G and V trims, the new Glanza is available in four trim levels: E, S, G, and V, corresponding to the Baleno’s Sigma, Delta, Zeta, and Alpha trims. The Glanza now has a much lower starting price (Rs 7.70 lakh for the G MT variant). 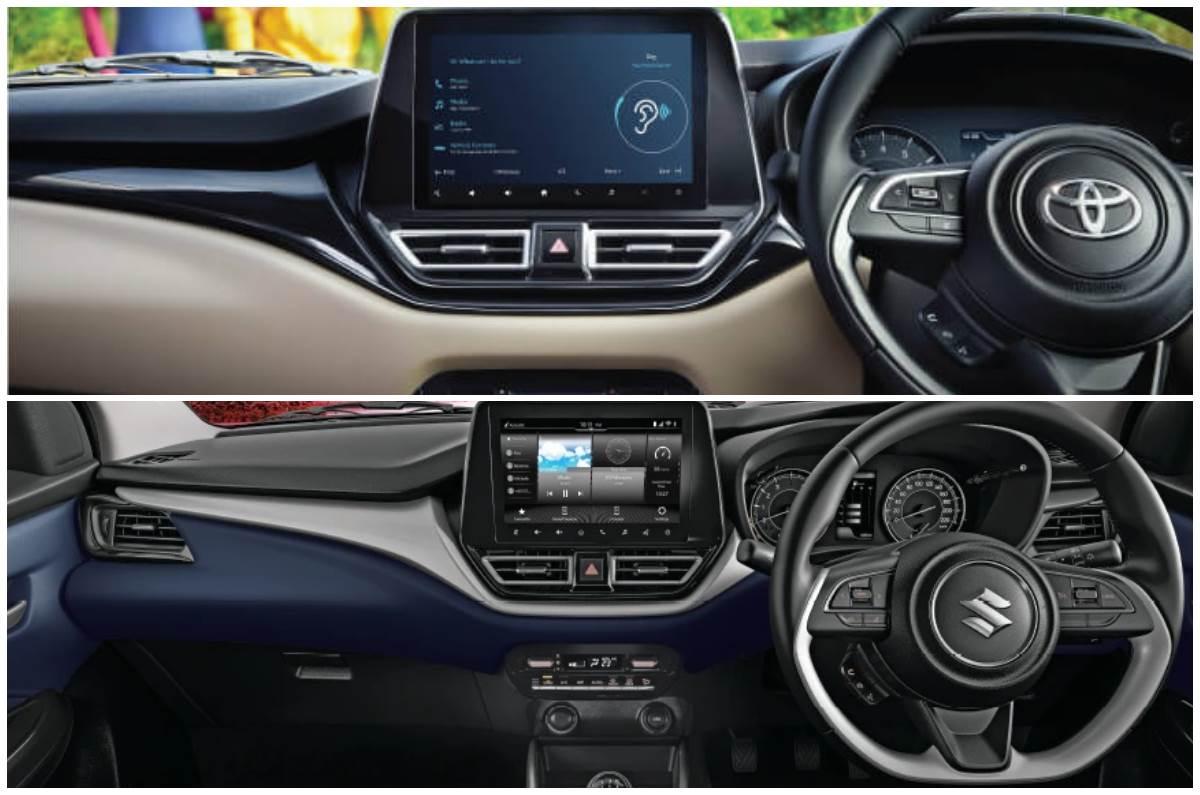 The new Glanza, like its predecessor, has a lot in common with the Baleno on the outside. While the overall proportions and silhouette of the two models are nearly identical, Toyota has made significant changes to differentiate the two models. The Glanza has been updated with a new, Camry-inspired front grille, a sportier front bumper, and headlights with different LED daytime running lights (DRLs). Baleno’s DRLs have three individual LED elements, whereas Glanza’s DRLs are simpler, L-shaped units.

The Glanza also gets a new design for the 16-inch alloy wheels on the sides. However, both models are nearly identical at the back, with the only difference being the badging. Both hatchbacks are available in Blue, Grey, White, Silver, and Red paint schemes, with the Baleno also getting a Beige option.

The Glanza and the new Baleno share the same design and layout, with a layered dashboard, a free-standing touchscreen in the centre, and a flat-bottom steering wheel. The main difference on the inside is Glanza’s black and beige colour scheme instead of the new Baleno’s black and navy blue combination. The outgoing Glanza’s cabin was virtually identical to the Baleno’s, save for the Toyota badge on the steering wheel.

The engines and transmissions of the new Glanza and Baleno are shared. Both hatchbacks are powered by a 90hp, 113 Nm, 1.2-litre, four-cylinder DualJet K12N petrol engine with a 5-speed manual or 5-speed AMT automatic transmission. In addition, the Glanza is the first Toyota in India to be equipped with an AMT transmission.

The claimed fuel economy figures for both hatchbacks are identical – 22.35kpl for the manual and 22.94kpl for the AMT auto.

Also Read  5 Most Expensive Cars in the World

This should sway several buyers toward the Glanza rather than the Baleno, especially since the price difference between the two is currently marginal.

The Toyota Glanza and the Maruti Suzuki Baleno remain competitive in the premium hatchback segment. As a result, their competitors include the Hyundai i20, Tata Altroz, Honda Jazz, and VW Polo. For more automobile-related content, stay tuned to Auto Tech Portal. 5 Most Expensive Cars in the World

Top 10 Tips On How To Prevent Swirl Marks